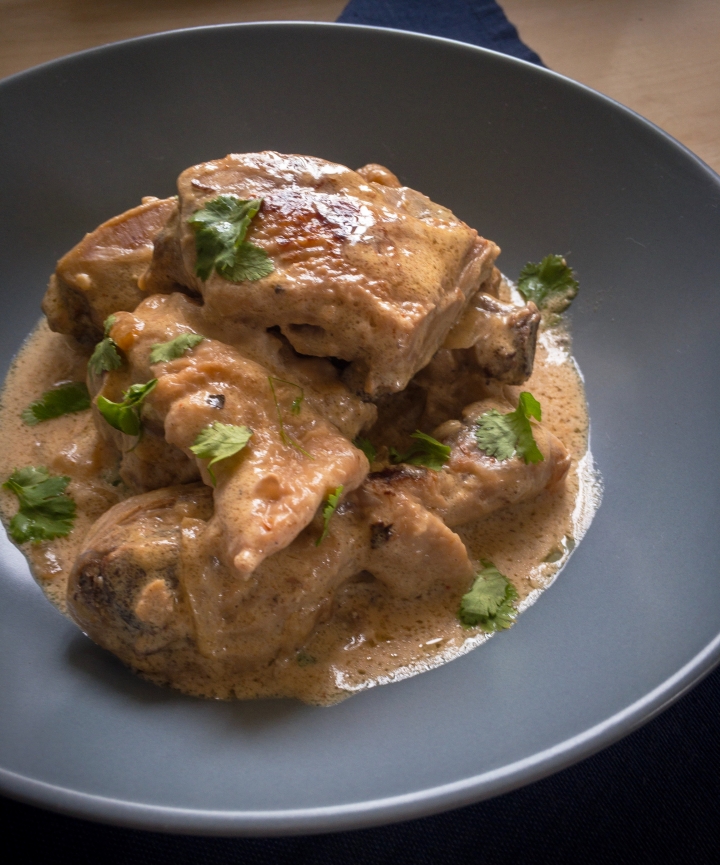 Because I bought a couple of bottles of Calamansi Puree last week on Lazada, I googled for calamansi recipes. Most of the recipes were either for juices, dipping sauces, marinade, or something with soy sauce. I felt like I needed something new and uncommon.

Then I found this recipe on Yummy PH.

I mean, calamansi–a.k.a. Philippine lemon–and cream? That sounds weird yet exciting! So on market day I snagged a couple of chicken thigh (they ran out of the fillet ones) and a bunch of wansoy.

Wansoy is often confused as the common parsley, but if you’ve ever used parsley and cilantro when cooking, you’d know from the smell that wansoy is more cilantro. As I researched on it, wansoy can be referred to as coriander leaves, or yes, cilantro. BUT to make matters more confusing, wansoy IS also referred to as Chinese parsley.

The outcome of this dish was surprising in a very good way.

My husband came home for lunch, sat down and said, “Oooh, wow, mushroom chicken,” because it looked like the Chicken in Creamy Mushroom Sauce that I often cook.

I kept mum and waited until he took a spoonful of it with rice, and watched his eyes grow wide. Shocked, even. He just continued chewing with his eyes locked with mine as he tried to figure the dish out.

The meal finished with so many praises from him and from myself, too! Needless to say, we really liked it! I guess what I liked most about it is using some common Filipino ingredient in ways we normally wouldn’t. Please give it a try!

Notes about the recipe: I hardly felt the cayenne, so feel free to add more if you’d like a little kick!