One of my biggest apprehensions about accepting invitations as a blogger is the negative connotation that bloggers–as long as you give them freebies–will write 5-star reviews and recommendations. I’d hate to be categorized as that, which is why I wrote my disclaimer page with a section about Sponsored Content. But then again, if I don’t accept and not write about it, then the world will be filled with biased reviews filled with the happiness of free food.

We got invited to try Fat Daddy’s Smokehouse in UP Town Center. A bit of a drive, to be honest. I opted for a Sunday because weekday/Saturday Manila traffic will not make me say yes to even free food. Luckily, we could be accommodated on a Sunday, so yes I of course I dragged the husband along! We also got to invite The McGees–my husband’s high school friend Adam, and his wife Joana, plus their two adorable daughters.

Alright let’s get to the review.

As expected, the place looked more of a barkada place (no surprise there), most tables accommodating at least four people. No stranger to wall art, I loved their doodled-on walls. 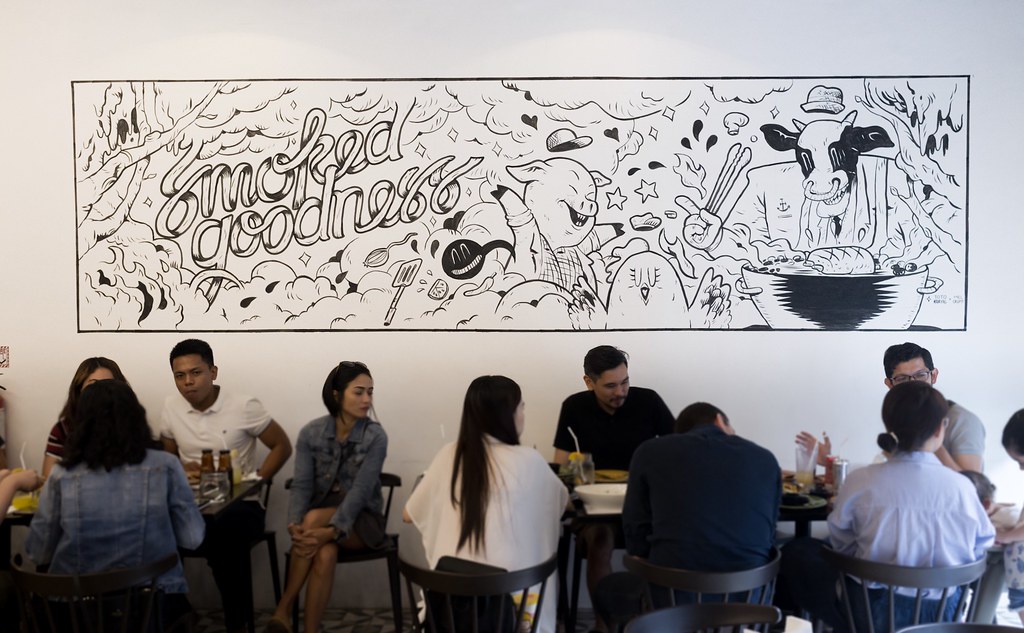 While we were waiting Bean (the McGees’ firstborn) got to play and doodle with crayons–I was surprised they even had crayons! 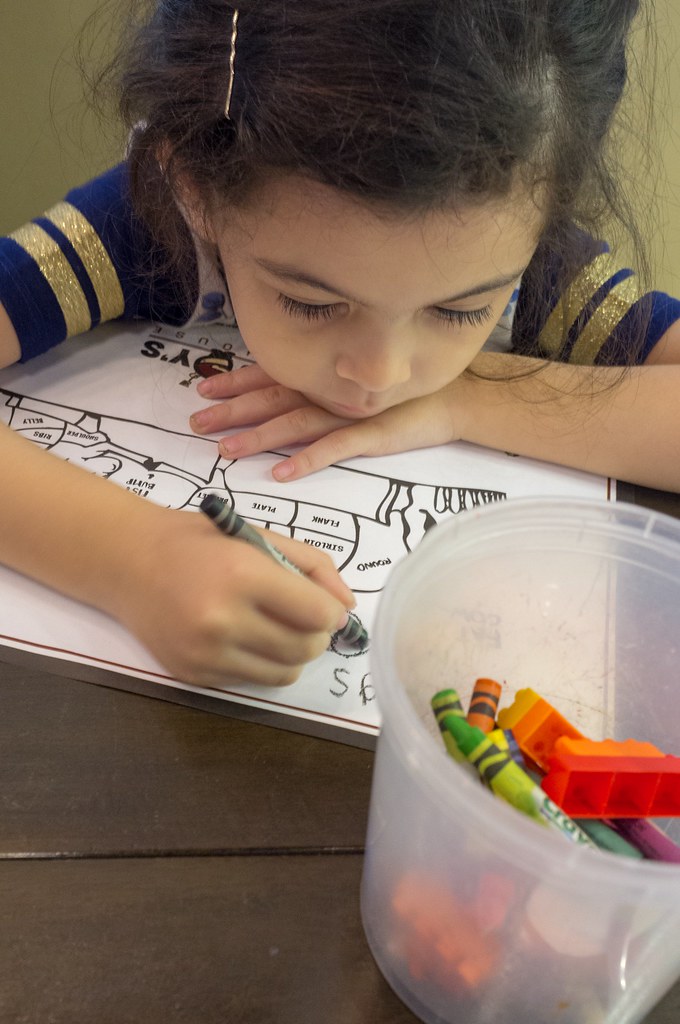 Apparently, Fat Daddy’s Smokehouse is the first concept restaurant of the same people behind Josiah’s Catering, one of the most prominent catering businesses in the Philippines. They established their test kitchen slash smokehouse in Marikina before opening up branches of the smokehouse in other parts of the metro. I faintly remember they used to have one in BGC, in Burgos Circle near where UCC is.

First one to come was the nachos. Jera’s Ultimate Pulled Pork and Bacon Nachos: a mound of nachos with bacon and pulled pork.

The serving was as big as a baking sheet, and they tell us it’s the half order. Blimey, will anyone else get to eat anything after this? I found the shebang on the salty side, given that the nachos itself were salted, add the bacon, pulled pork to that, and cheese. A bit too salty for my taste.

Next came the very interesting Buttermilk Fried Livers. As with most new food I encounter, I try to think of how it will turn out, but I was blanking on this one.

The contrasting crunchiness of the batter mixed with the liver texture turned out really lovely. That something’s-going-on-but-I-can’t-understand-it feeling always delights me, and I silently thank the culinary gods for creating geniuses who come up with these things that my #basic self will probably never think of putting together. This was easily one of my faves. It’s a good deal for P185, too.

To my burger-loving husband’s delight, the burgers started arriving. 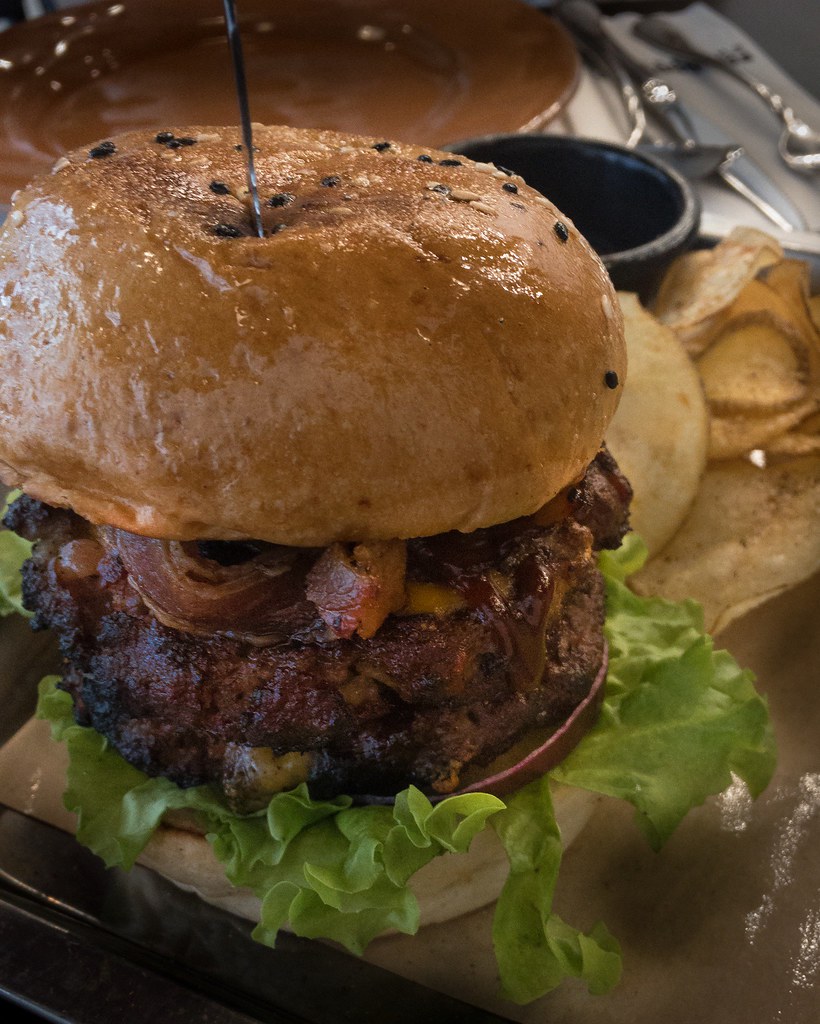 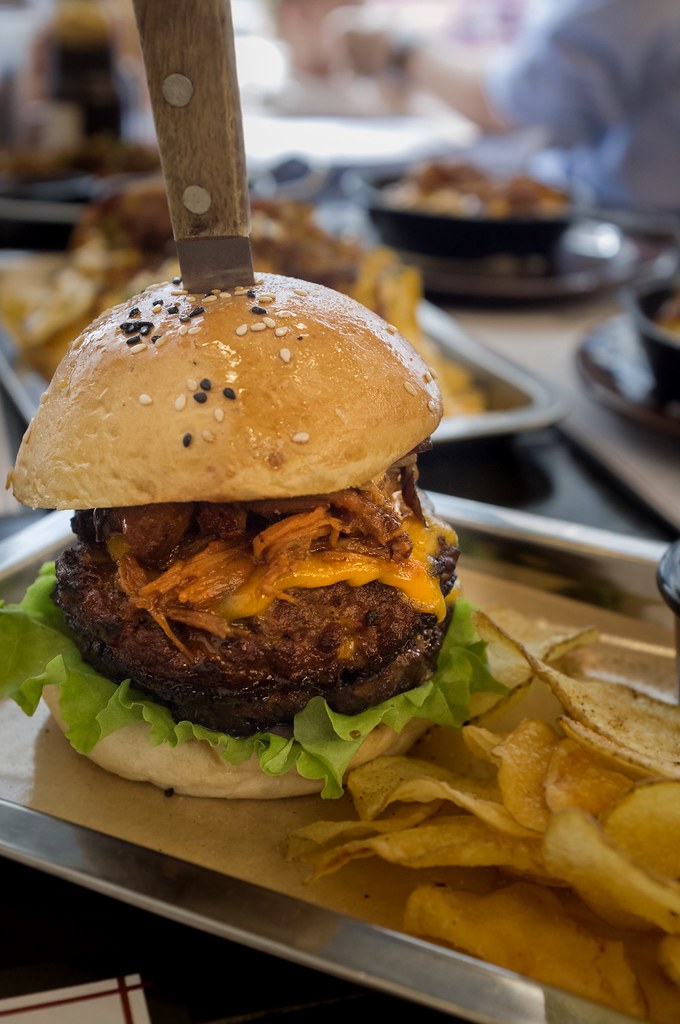 Okay so forgive me but one of these was Triple Death Burger, and the other was Daddy’s Burger, both bestsellers of the place. Through his muffled voice, A said the burgers were perfectly charred and moist inside despite obviously being on the well-done range.

I’m not the best burger-rater because I have a hard time enjoying stuffing my mouth with too much food–but how else should you enjoy a multi-patty burger, right? I gotta trust him on this one, because he kept eating the burger even if beef triggers his GERD!

Since it’s lent, they also offer a Fried Seafood Platter on the menu; it’s made up of fried and battered fish fingers, squid and shrimps. We were told this is only available until the end of the month. Nothing too spectacular about it, although I liked that the shrimp’s texture wasn’t mushy like most frozen shrimps in diners.

I know you’re waiting for the meat. Here it is! It’s also on a platter as big as a baking sheet. It has pulled pork, beef brisket, pork ribs, chicken barbecue, and hot links. It comes with side dishes we hardly touched (because too much food!): half a grilled corn smothered in three kinds of cheese, rice, an onion and chives muffin, and a small cup of sesame coleslaw.

Smoked for hours at their Marikina kitchen, this Smoked Meat Platter is obviously the star of the show! I loved the pork ribs and the homemade no-extender sausages (hot links) among all these. While it was not fall off the bones tender, I liked how the ribs kept its form, and the char was of course delightfully welcome to the smoked meat. I could imagine taking the hot links home and slicing them up for wine nights. And cheese.

The chicken was alright and still juicy; it’s hard to keep chicken moist if you smoke and char it like that!

I found the brisket to be quite bland, as if the flavors did not reach the depth of the meat. That was quite sad because that’s the one smoked the longest (up to 12 hours!)

The same can be said about the Brisket Burrito Bites. It may be that the brisket was lacking some flavor so this burrito just felt like rice with barbecue sauce wrapped up. Love that sauce, though! (Hello herbs.)

The kids loved the Bacon and Mac and Cheese Poppers – basically mac and cheese with bacon rolled into a ball and then deep fried. Yummy! Too yummy we forgot to take a photo of it! But fret not, we also had side order of Mac and Cheese–also with bacon on top AND cooked in bacon fat. Bacon is life, guys. OF COURSE I loved this.

There was another side dish called Hot Mess that was like mashed potato married pulled pork. I found that a little on the salty side, too, or I just really prefer mac and cheese. LOL

Most of the dishes were flavorful enough that we didn’t have the time to open up the bottle of the barbecue sauce, but just for the heck of it I tried the spicy one. Mmmm! You could purchase a bottle of the original sauce, the spicier version, and their mustard too.

I later on realized that I may have been commenting that some of the dishes were salty, because I wasn’t eating rice, maybe. I would agree that with rice and a decent splash of barbecue sauce it’d be better balanced. As for me, I’m glad I got the freshly squeezed Lemonade (I like sour things) and hubby got himself a glass of Orange Juice that was really fresh and pulpy too.

Good things come to those who wait. For dessert we were served Bacon S’mores. Yum, yum, yum. What a great way to end that carnivorous feast! Yes it’s bacon. And of course it works well with the marshmallow and chocolate!

Okay so that took me two hours of my life to write!

There were some dishes that were quite salty for my taste, and would probably tone it down with either rice, sauce or beer! That said, this place is a good get together for families who love meat, or if you work nearby, for your Friday after-office hang out session.

I recommend not missing the hot links, fried buttermilk liver, bacon and mac cheese poppers, burgers, and the pork ribs. If this was nearer where we live, I’d come back and try the other stuff. Heard the pasta and fried pickles are good, too!

It’s a good value for your money as the servings were huge. The platter can be shared by up to 4-6 people, me thinks!

* This is my unbiased opinion about our experience. Our food was paid for by the establishment with the agreement that I am free to express my thoughts, without restrictions, in this honest review. To read more about how I accommodate sponsored content, you may read my disclaimer page here.